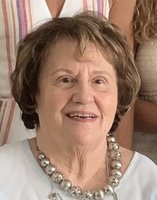 WESTPORT, CONN Carol Bloch, a resident of Westport since 1972, died on October 12 in Norwalk Hospital. She was 83. Born in Boston in 1936, she was raised in Brookline, Massachusetts, as the younger daughter of the late Benjamin and Edith (Green) Shapiro. After graduation from Brookline High School, she entered Syracuse University transferring after her sophomore year to Boston University from which she received a B. A. in Fine Arts in 1957. From 1957 to 1960, she was an administrative assistant at Children’s Hospital in Boston and then moved to New York City where she pursued an editorial and fashion publicity career, first with Haire Publishing Company and then with the National Cotton Council (now Cotton Incorporated). She married Edward Bloch in 1967 and moved with him and their two daughters to Westport in 1972 following the relocation of Stauffer Chemical Company, where Mr. Bloch was a public relations executive, from New York City to Westport. In 1990, she became the benefits administrator for the Westport Board of Education, a post she held for ten years. In addition to her husband, she is survived by her daughters Elizabeth Bloch Lindecke and her husband Steven Lindecke of Chagrin Falls, Ohio, and their three children Ryan, Kyle and Lucy, and Suzanne Bloch Sodergren and her husband David Sodergren of Glenmont, N. Y. and their two children Emily and Abigail. She also is survived by her sister Jeanne Alpert of White Plains, N. Y. The family will be receiving friends on Tuesday, October 15th from 5:00 to 7:00 p.m. at Harding Funeral Home, 210 Post Road East, Westport. PRIVATE BURIAL took place here at Willowbrook Cemetery, 395 Main Street, Westport. In lieu of flowers, please make a donation to your favorite charity.