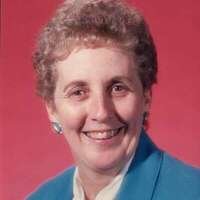 STRATFORD, CONN Carol Elaine Studdiford, age 86, of Stratford passed away on May 2, 2020 in Bridgeport Hospital from complications relating to the COVID-19 virus. Carol was born in Elizabeth, NJ, the only child of the late Eli and Elsie Plant, and grew up in Hillside, NJ where her father was a police officer. She graduated from Hillside High School in 1951 with honors and worked as a secretary until she met and married her handsome Marine, Lawrence (Larry) Studdiford, in 1954. Carol & Larry were married 58 years until his death in 2012. The couple raised their 3 girls (Cheryl, Donna and Tami) in Manville, NJ until they moved to Enfield, CT in 1970 where Lawrence Jr. (Larry) was born. They lived there until 1973 before moving to Stratford. Carol retired from the federal government in 1995 where she worked as a Quality Assurance Specialist at Sikorsky Aircraft and Avco. She loved to sew and learned to quilt after she retired and enjoyed making quilts for family and friends. She was a member of the Stratford United Methodist Church, working at their thrift shop every other Saturday where she enjoyed meeting new friends. Family was her life, and she loved her dogs, which you would see her walking almost every day. Carol is survived by two daughters, Cheryl Alusik and her husband, John of Stratford; Donna Leroux and her husband, Don of Uncasville, CT; one son, Larry and his wife, Donna of Alexandria, VA; five grandchildren, Devan and John Alusik, Nicholas Leroux, Lauren and Shea Studdiford; and one niece, Sharon Hendricks. Due to current CDC Federal guidelines in keeping with public safety standards, the family is holding a private entombment here at Willowbrook Cemetery, 395 Main Street, Westport. In lieu of flowers, Carol wished for donations to be made in her name to the Stratford Animal Shelter and the Stratford United Methodist Church. The Adzima Funeral Home-Stratford has been entrusted with the funeral arrangements.