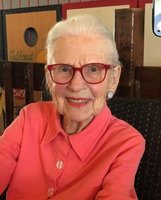 NAPLES, FL Our mother, Sally J. Deegan, passed away after a valiant battle with old age. She was born May 28, 1926, in Ridgefield, CT to Marion Wakeman & Sereno Thorp Jacob. She was quick to share that her dad was a pioneer aviator who flew in The Lafayette Escadrille. As a child, she battled numerous life-threatening illnesses and missed a lot of school. However, her determination to succeed at everything she did, saw her through; and she graduated valedictorian of her class from Ridgefield High School. A child of the Great Depression, after high school graduation, she went right to New York City and was hired as the secretary to the President of Faberge Perfumes. Fable has it she was taking dictation while watching the plane crash into The Empire State Building. In 1946, she married our dad, Donald B. Kellogg, and they resided down at Compo Beach in Westport, CT. Several years after their 4th child was born, Don passed away, leaving Mom a young widow with 4 kids under the age of 13. She drew on her warrior spirit and did what she had to do to keep a roof over our heads and food on the table. Not too long after, she met the love of her life, William F. Deegan, and they married in 1962. He had the courage to take on 4 kids and survived our teenage years. Bill was a crack golfer; so mom, drawing again upon her tenacious spirit, learned how to play. After summers spent on Fairfield Beach, they pursued their dream of having a home in Vermont & joining The Woodstock Country Club where mom won the club championship and chaired the women’s golf committee. Before moving to Vermont permanently, Mom was secretary to several principals at Staples High School in Westport where no student wanted to be confronted by her. She also formed the union for public school staff that provided health insurance benefits. She was brilliant at reading fine print & learning the ins & outs of the insurance industry which served her for the rest of her life. Bill & Mom enjoyed many years in Woodstock, VT. They Played lots of golf & made many friends. Bill passed away in 1997. Before moving to Naples, FL in 2001, Mom had worked at The Bank of Woodstock & was a part-time Realtor. Mom loved her hard-earned retirement years in Naples, residing at Naples Lakes Country Club; where she enjoyed lots of golf, tennis, bridge and many new friends. She was playing golf just before her 90th birthday and had a wicked short game. However, old age crept up on her, and her final years were spent at Aston Gardens Senior Living where she made even more friends. Our Mom was a Valkyrie. She had gumption & grit. She was smarter than most and her intuition never failed her. Saint Peter better have his office in order because she will see to it that his filing system is in order and desk clean. She is survived by her brother, Merritt W. B. Jacob of Hendersonville, NC; daughter Sally Kellogg (Bruce Tansey) Naples, FL; Wm. Bradley Kellogg, Fairfield, CT; Hope Kellogg Kokas (Dan), Holderness, NH; Donald B. Kellogg, Jr. (Anthony Arguelles), Providence, RI. and step daughter Sharon Deegan. She will be missed by her 5 grandchildren & 7 great grandsons. She was Aunt Sally to the Jacob girls residing in CT & Newport and their brother. Finally, she will be missed by her beloved cat Casper. We will be forever grateful to Jessica Anderson, of Anderson Companion Care, for her dedication to Mom’s comfort & care for the past 6 months; the folks at AVOW Hospice and to all the staff at The Inn at Aston Gardens. Arrangements made by Fuller Funeral Home. As per Mom’s request, please join us for a memorial get-together to celebrate a life well lived at The Cove Inn Chickee, Tuesday, January 7th from 4:00 – 6:00. Plan to share your Sally stories! Interment will be held on Monday, October 19, 2020 at 12:00PM here at Willowbrook Cemetery, 395 Main Street, Westport. In lieu of flowers, please send a donation to The Humane Society or The First Tee.