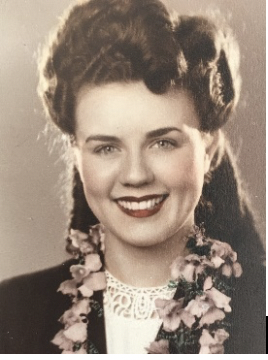 Lorraine Rose Bisgard Helms, of Westport, CT, passed away peacefully at home with her family around her on Wednesday, April 3, 2019.

She was born on September 25, 1926, the daughter of Daisy L. and Ernest C. Bisgard, and grew up in Denver, CO.  She was a graduate of Manual High School in Denver, Colorado, Class of ’45. She soon became a model and was crowned Flying Tiger Queen in 1945, and subsequently was named Miss Denver, 1945 and Miss Colorado, 1945. She attended Denver University and worked as a Bridal Consultant for the Denver Dry Goods Company.

Upon receipt of an acting contract from MGM, she turned down the offer to wait for her fiancé, then-Lieutenant, J. Lynn Helms, a Navy pilot. In 1947, Thirteen months after his return from overseas assignments, they were married. As a US Navy/Marine Corps wife, and soon mother, they were stationed at several bases throughout the US. When Lynn retired from the service in 1956, they moved to Columbus Ohio where Lorraine became active as a “Gray Lady” for the Red Cross Service while raising her four children and helping her husband with his career.

After subsequent moves to Ann Arbor, MI and Westport, CT, she was active with the Junior League, PTA, Young Republican’s Association, Westport Women’s Club and the Saugatuck Congregational Church.  Lorraine and Lynn made temporary moves to Lock Haven, Pennsylvania and Vero Beach, Florida for Lynn’s career in aviation and to Washington, DC as a Reagan appointee. As the FAA Administrator’s wife, she travelled with her husband around the world representing US Aviation concerns. Lorraine was the gracious, magic-ingredient in her husband’s success. She gained her pilot’s license in 1977 and spent many years in the co-pilot seat of their Piper Chieftain.

Lorraine always enjoyed entertaining, painting, playing the piano, caring for her pets, vacationing on their sloop “Aeolus” and, most of all, being with her children and grandchildren. She led an extraordinary, full and blessed life.  She was a beautiful woman, even in her nineties and her special smile lit up the room and the hearts of her family. She will be dearly missed.

She was predeceased by her beloved husband of nearly 65 years, J. Lynn Helms, her son Jon L. Helms of Westport, CT and her brother, Ernest C. Bisgard of Denver, CO.

She is survived by herchildren; Loralyn Helms of West River, MD; her daughter Carole Helms Reichhelm and her husband George Reichhelm of Westport; her son Zack C. Helms and his wife Katharina Rourke Helms of Wilton, and her grandchildren: Chelsea Maruia Helms, Clayton Jon Helms and Tegan Rourke Helms.

Lorraine's funeral will be held at 11:00AM on Thursday, April 18, 2019 at the Talmadge Hill Community Church in Darien. a PRIVATE interment will follow at Willowbrook Cemetery, Westport.

The Harding's of Westport are directing the arrangements.

** Condolences may be left on this page for the family. **

To plant a tree in memory of Lorraine Helms, please visit Tribute Store