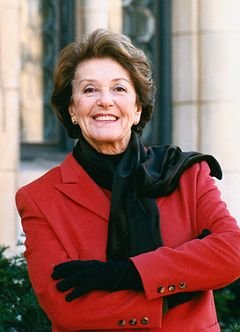 Vivian Perlis, a musicologist who founded Yale University’s Oral History of American Music, an invaluable archive of audio and video interviews that she directed for more than 40 years, died on Thursday, July 04, 2019 at her home in Weston, Conn. She was 91.

Her family announced the death.

The oral history project includes some 3,000 recordings of interviews with composers and other major musical figures, from Aaron Copland to Elliott Carter, from Duke Ellington to John Adams. The eminent musicologist H. Wiley Hitchcock described it as an “incomparable resource.”

Ms. Perlis came to run the project accidentally, after taking a job as a research librarian at the Yale School of Music in 1967. She had become involved there with the library’s extensive Charles Ivescollection, and one day she made a visit to New York City to pick up some additional materials donated by Julian Myrick, who had been a partner with Ives in an insurance business.

Thinking that he might have some recollections to share, Ms. Perlis brought along a portable tape recorder. She was fascinated by the stories that Mr. Myrick, an elderly, hard-of-hearing former Southerner, told about the iconoclastic, curmudgeonly Ives.

This led her to conduct a series of more than 60 interviews over several years with people who had known and worked with Ives. A nephew in Danbury, Conn., Ives’s hometown, recounted playing baseball with “Uncle Charlie.” The composer Lehman Engel recalled hearing Ives talk about the “old days,” when the “sissies,” meaning timidly conservative performers, refused to play Ives’s flinty music.

At the time, Ms. Perlis faced disdain from traditional musicologists who thought recorded interviews would be merely anecdotal, overly subjective and prone to factual inconsistencies. There were “sneers about anything that wasn’t hard-line research,” Mr. Hitchcock said in an interview with The New York Times in 1997.

The “establishment types” in his field, he added, “considered it pipsqueak stuff.”

Ms. Perlis’s persistence paid off. In 1974, for the Ives centenary, selections from these interviews — edited and arranged by her — were published by Yale University Press as “Charles Ives Remembered: An Oral History.” The next year the book won the Otto Kinkeldey Award, the highest honor of the American Musicological Society, named after its first president.

Two subsequent books, which Ms. Perlis wrote with Copland, had more mixed receptions. “Copland: 1900 Through 1942” and “Copland Since 1943,” both published in the mid-1980s, include long excerpts from Ms. Perlis’s comprehensive interviews with the composer, explanatory passages by Ms. Perlis and insightful comments from many Copland friends and associates, among them Ned Rorem, Leonard Bernstein and Agnes de Mille. But the portrait of Copland’s life is veiled.

Funeral services and burial here at Willowbrook Cemetery, are to be held privately.  The Abraham Green Funeral Home of Fairfield is directing the arrangements.

To plant a beautiful memorial tree in memory of Vivian Perlis, please visit our Tree Store