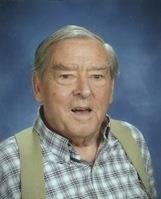 Henry was born in Ashford, England on November 17, 1923, son of Henry and Mary Ivey Banks. He was predeceased by his brother Richard. His childhood had the difficulties of the Depression and the loss of his father at the age of 10, but Henry's positive spirit carried him through. He had great adventures including building canoes and bicycling through the countryside.

At the start of World War II, Henry at age 16 volunteered with the Fire Service and rode his bicycle through London during the Blitz, delivering messages sent between Fire Captains. At age 17, he joined the Royal Navy, graduating from officer training in 1940.

He took part in the invasion of North Africa aboard the HMS Hartland, which was sunk by the Axis powers at the entrance to the harbor of Oran, Algeria. Wounded by shrapnel and saved by a sailor who helped him make the long swim, he was taken prisoner by the Vichy French troops. Liberated by American troops who had invaded by land, Henry spent the remainder of the war on a lend-lease PT mine sweeper in the Mediterranean Sea and the Indian Ocean.

At the close of the war, Henry was invited by the captain of his ship to an apprenticeship at a North Ireland linen-weaving factory, Stevenson & Son. He was selected to become a salesman in their New York office, Hamilton Adams Imports, Ltd. He became president of the company in 1964, a position he held until his retirement in 1988. During his tenure, Henry expanded the business to Poland, Belgium and Czechoslovakia. For his exceptional contribution to the linen industry, he was awarded a knighthood, the Chevalier de l'Ordre de la Couronne, by the King of Belgium in 1976, as well as high recognition from the Polish government. Henry became a United States citizen in 1961 and was always proud to be an American.

In retirement, Henry continued as an avid gardener and beekeeper and he took up ceramics. His imaginative pieces exhibit the great creativity that fueled a very full and energetic life.

In addition to his loving wife of 62 years, he is survived by his five children and their spouses: Mary and Frank Strohm of Fairfield, CT; Henry and Kathy Banks of Denmark, ME; David and Patty Banks of Weston, MA; Barbara and Charles Banks-Altekruse of Berkeley, CA and Sarah Banks and Howard Waldman of Yonkers, NY; 11 grandchildren and numerous nieces and nephews across the US, Canada and Great Britain.

A private ceremony was held on Wednesday, December 14, 2016; a memorial celebration of Henry's life is being planned for spring 2017. The Hoyt-Cognetta Funeral Home & Crematory, 5 East Wall Street, Norwalk, has been entrusted with arrangements.  A PRIVATE burial was held here at Willowbrook Cemetery, Westport.

In lieu of flowers, contributions can be made to Scenic Hudson at www.scenichudson.org (attn. Veronica Renzo, One Civic Center Plaza, Suite 200, Poughkeepsie, NY 12601), as Henry was a lifelong outdoorsman and especially loved the beauty of the Hudson River; or to the Silvermine Arts Center at www.silvermineart.org (1037 Silvermine Road, New Canaan, CT 06840), where Henry refined his ceramics skills.

To plant a beautiful memorial tree in memory of Henry Banks, please visit our Tree Store