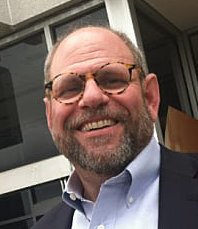 Olson was president and CEO of Port Chester, New York-based POKO Partners, LLC, which he founded in 1995. It develops, builds and manages residential, retail and commercial properties throughout New York, New Jersey and Connecticut inner-city communities.

Prior to founding POKO Partners, he was the senior vice president of GTE Realty Company, a firm developed from a resulting debt restructure he led as director of finance for the Markham Company.

He began his career in 1981 with Bank Leumi in commercial construction lending.

In 2009, he and wife Pam were honored with the Anti-Defamation League’s 2009 Distinguished Community Leadership Award at Westport’s Temple Israel.

Active in community affairs, he was a past president and board member of the Norwalk Symphony Orchestra.

Survivors include his wife Pam and children Jordan and Spencer.

Interment will follow here in Willowbrook Cemetery at approximately 2:30PM

Shiva will be observed at the Olson home, located at 79 Easton Rd, Westport with the schedule provided.

To send flowers to the family or plant a tree in memory of Kenneth Olson, please visit Tribute Store
Tuesday
14
November