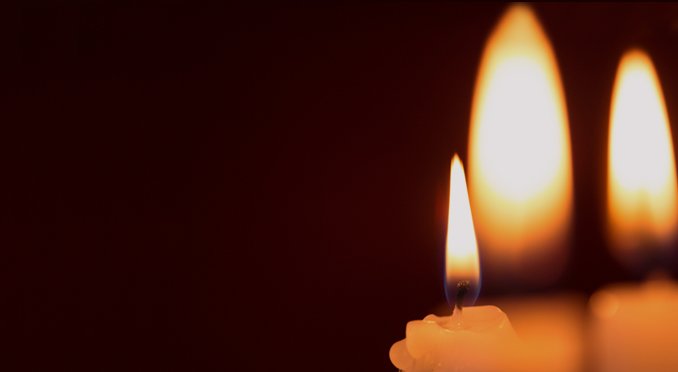 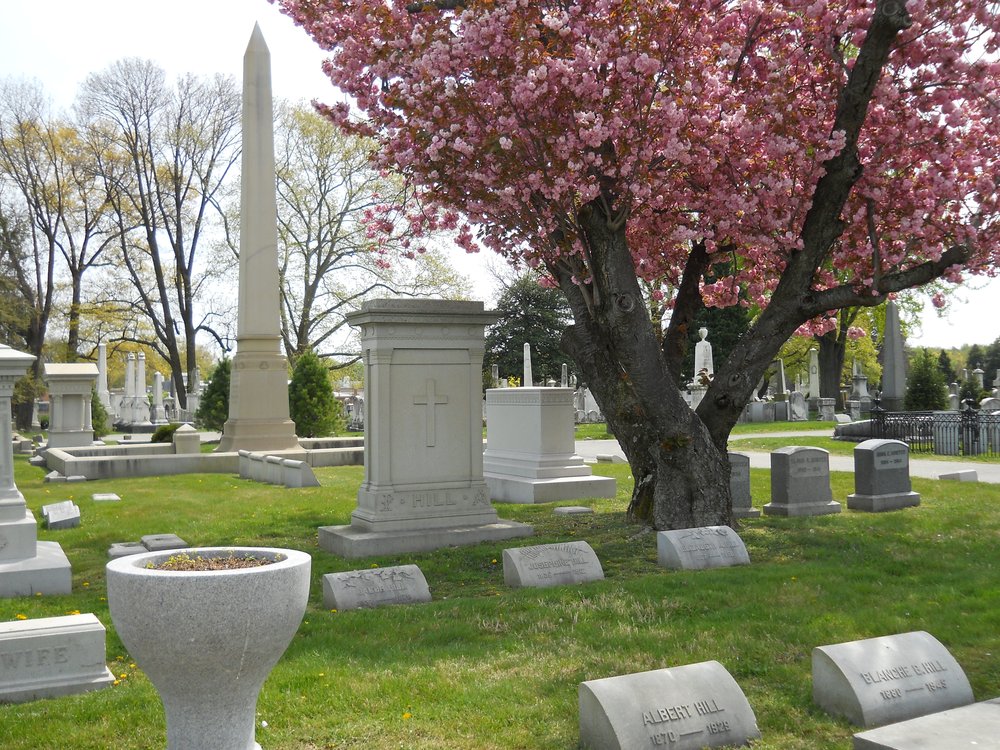 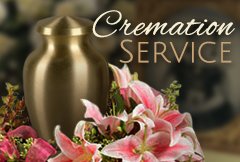 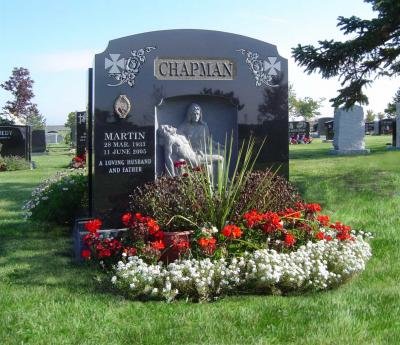 In early 1847, Brooklyn, New York’s Green-Wood Cemetery became quite the destination, as its beauty attracted over 500,000 visitors a year. Ambrose S. Hurlbutt, a local Westport businessman and politician, who benefited significantly from the California Gold Rush, took notice. This is when Hurlbutt’s vision of a new cemetery for Westport emerged.

Below is historical information we've collected over nearly a two century period, much of it passed down from generation to generation by reputable lot owners. Also included are news articles from "The Westporter", the town's newspaper. 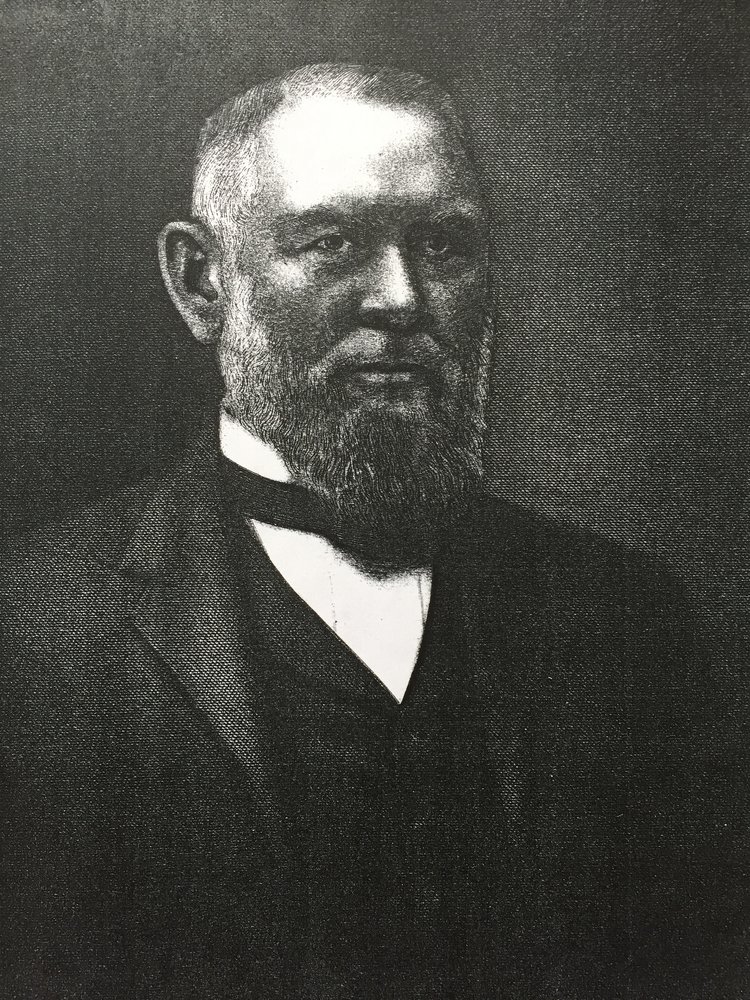 Located in one of our most sought after sections, Ambrose S. Hurlbutt's plot is located in Section 1. With 20 graves occupied, he and his entire family are buried amongst the other forefathers of Westport. 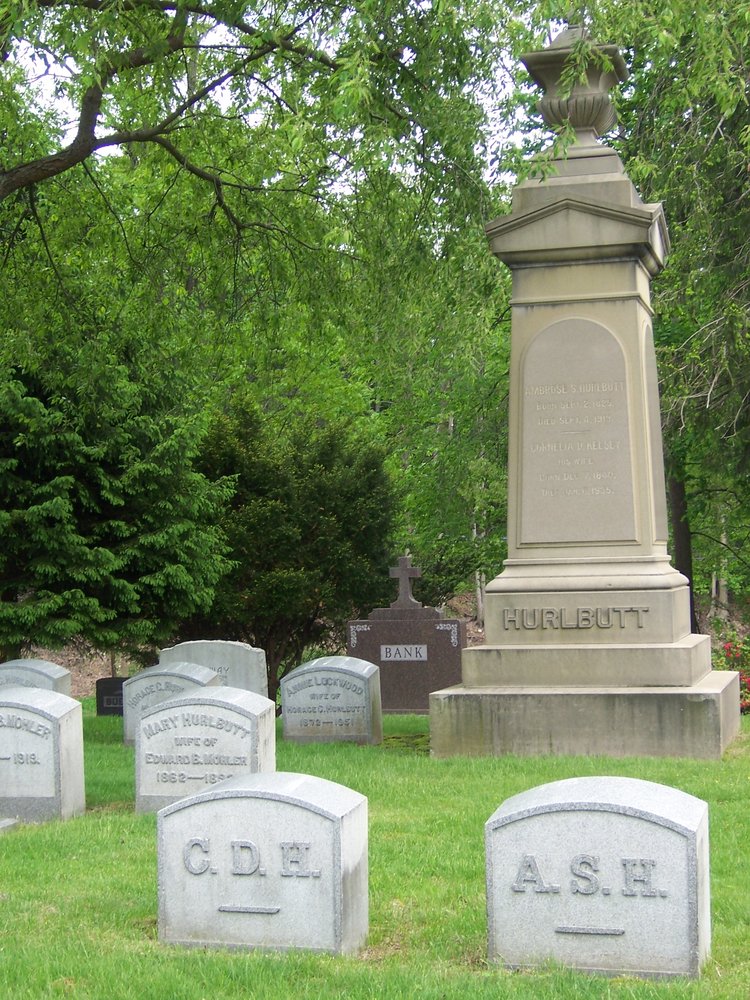 Hurlbutt’s long-time friends and fellow businessmen, Frederick F. Morehouse and Morris Ketchum, were brought into the mix and subsequently held private meetings with Green-Wood Cemetery’s well known landscape architect, David Bates Douglass. Douglass, who's vision for cemeteries were meant for the living, envisioned the graveyard to reflect a park-like setting. Meetings between the businessmen and Douglass meandered until 1849, when they came to an abrupt halt, following Douglass’ untimely death. 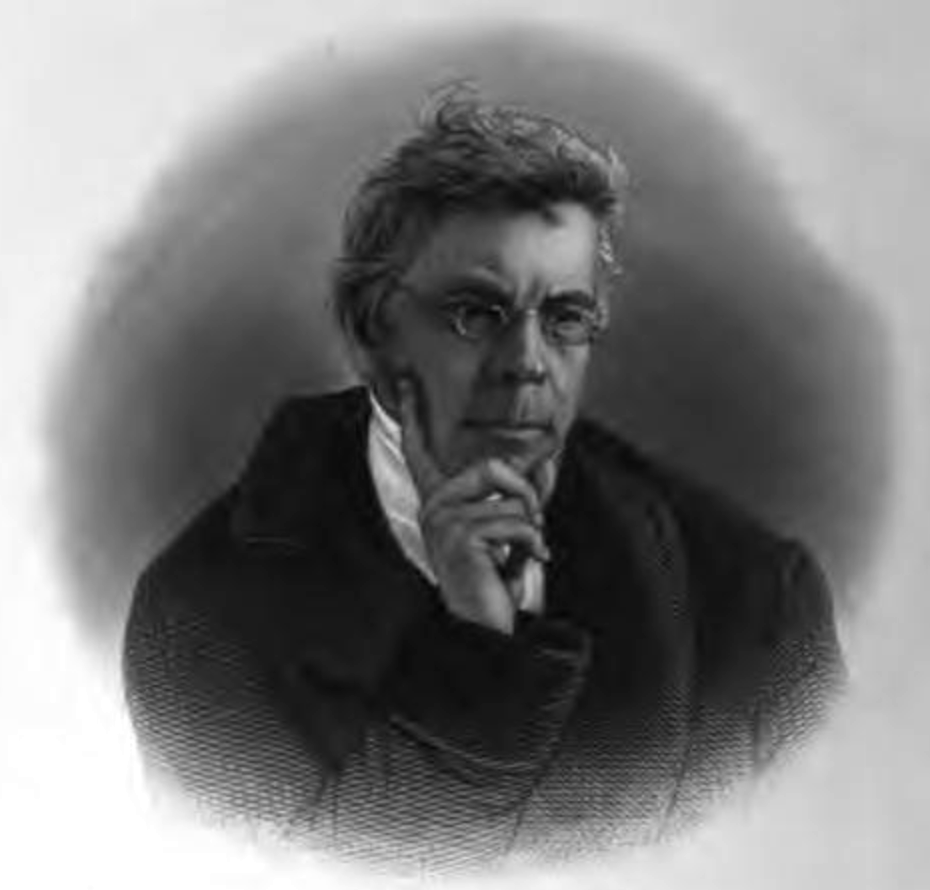 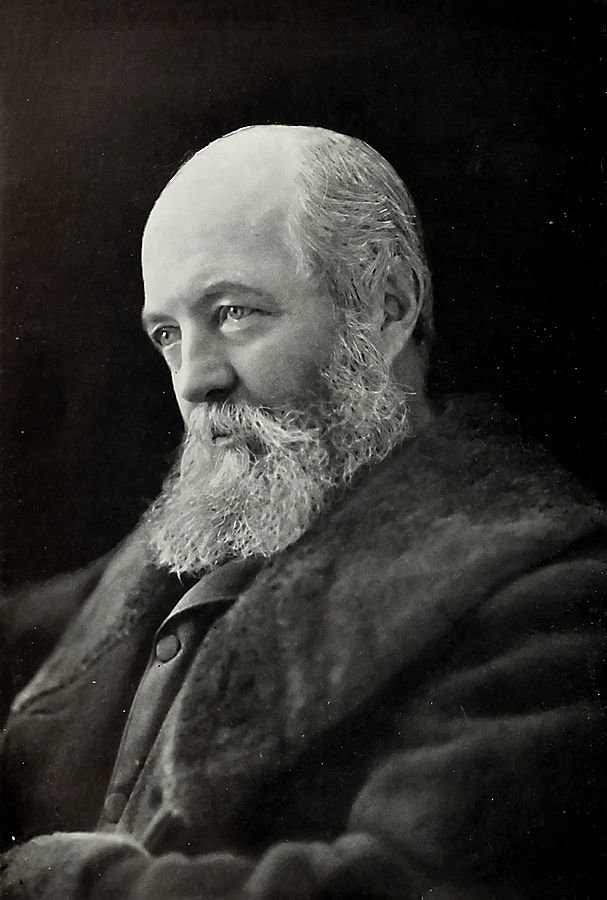 The project was revitalized in 1876, when Ketchum introduced Hurlbutt at a chance meeting, to the “Father of American Landscape Architecture”, Frederick Law Olmstead.

Olmstead revered David Bates Douglass’ work at Green-Wood, which was the impetus to him entering & winning the design competition for Central Park with co-designer and business partner, Calvert Vaux.

When Olmstead became aware of Douglass' involvement in the beginning stages of Willow Brook, he felt an obligation to finish what Douglass started. 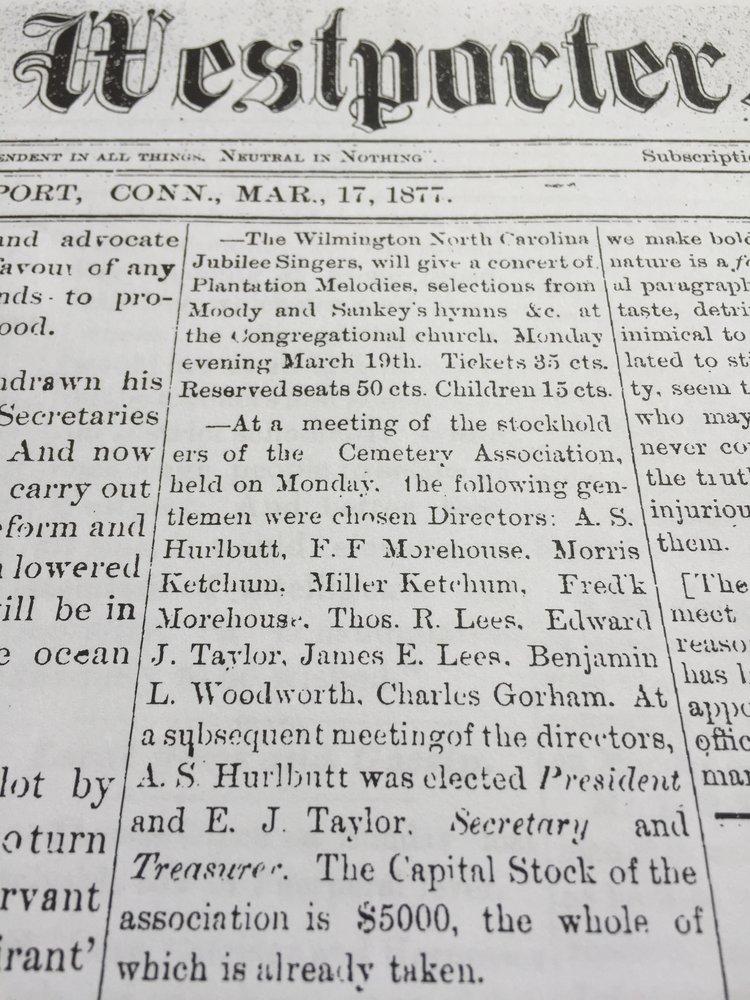 With Olmstead on board, Hurlbutt, Morehouse and Ketchum began their journey to create Willow Brook.

Published in the December 16, 1876 edition of The Westporter was the official property transaction and the owner's intention.

"- New Cemetery. We learned that Mr. A. Hurlbutt on Wednesday (December 13, 1876) of this week, bought of Mr. F.F. Morehouse twenty acres situated a short distance above the residence of Mr. J. Smibert, upon which it is intended to lay out a new cemetery. A joint stock company is to be organized at once, one ½ of the stock being already subscribed. And now that we have provided for the dead, let us do something for the living. Why not establish a town library and reading room. Who will immortalize his name by setting the ball in motion?"

On March 17, 1877, Willow Brook's board was created, which consisted of prominent Westporters. Many of the men listed were the founding fathers of Westport, stockholders of the First Nation Bank and other fine institutions and companies in early Westport, all of which are residents of Willowbrook today. (photo above) 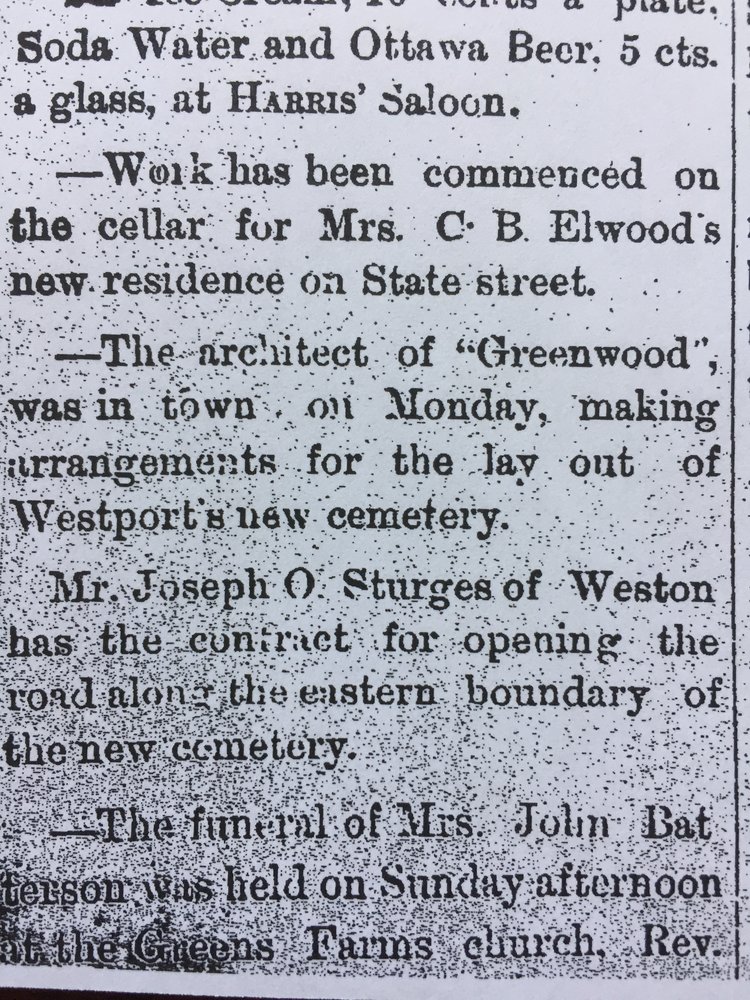 on March 24, 1877, the Association sought the reader's opinion, asking the publisher to write: “’Willow Bank’. How do our readers like that as name for the new cemetery?”

On Monday, April 23, 1877, it was reported that “the architect of “Greenwood” was in town making arrangements for the layout of Westport’s new cemetery."

The reference to the architect was none other than Mr. Frederick Law Olmstead.

Willow Brook Cemetery managed somehow to be mentioned in The Westporter nearly every publication thereafter, in some form or another - all to keep themselves relevant.

It's not to wonder why, with the owners of Willowbrook being the town's political figureheads.

Commissioned to lay out Willow Brook, Olmstead’s team graded the property as such, to reflect the same concept of Green-Wood Cemetery which included paths and a wide variety of specimen trees. The local paper reported on Saturday, June 16, 1877 that “The foundation for a building to be used as a porter’s lodge has been commenced on the new cemetery grounds." The Queen Anne style home which was built in 1877 was originally located at the entrance of the cemetery, but was moved in the early 1900’s to where it currently sits today in its original splendor. This home is used for Willowbrook’s day-to-day office operations.

On June 23, 1877, it was reported that “a fine map of Westport’s Green-Wood viz: “Willow Brook” may be seen at the town clerk’s office”. Many other articles include promoting the property, as indicated on July 7, 1877 where it states: “The best piece of road in town is in front of “Willow Brook” Cemetery, on North Main Street.” 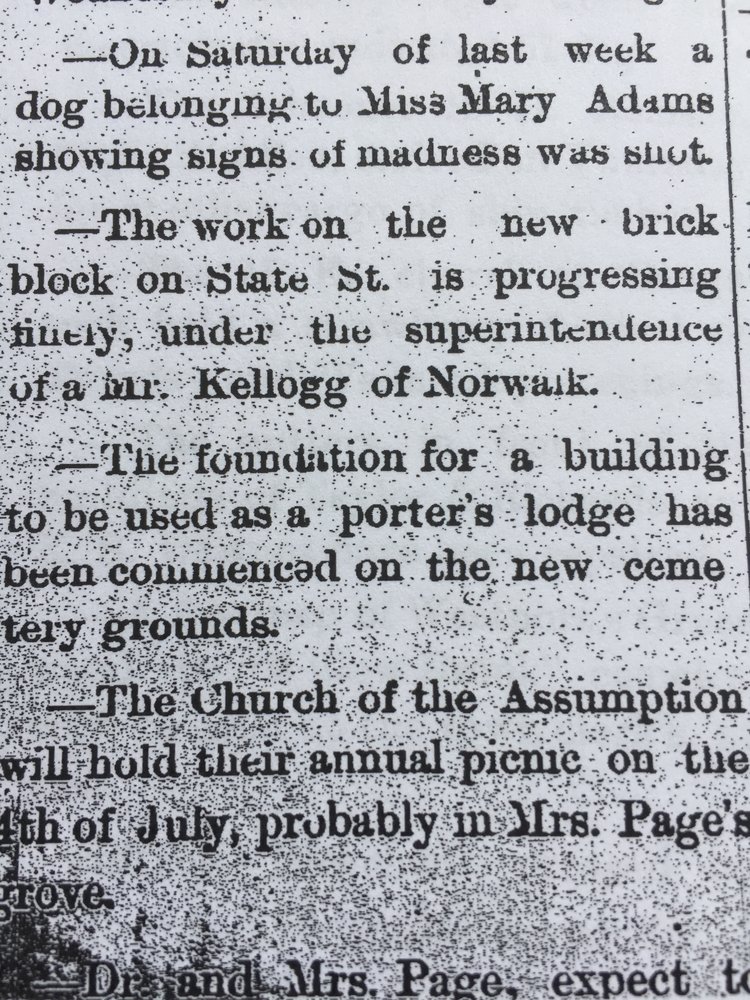 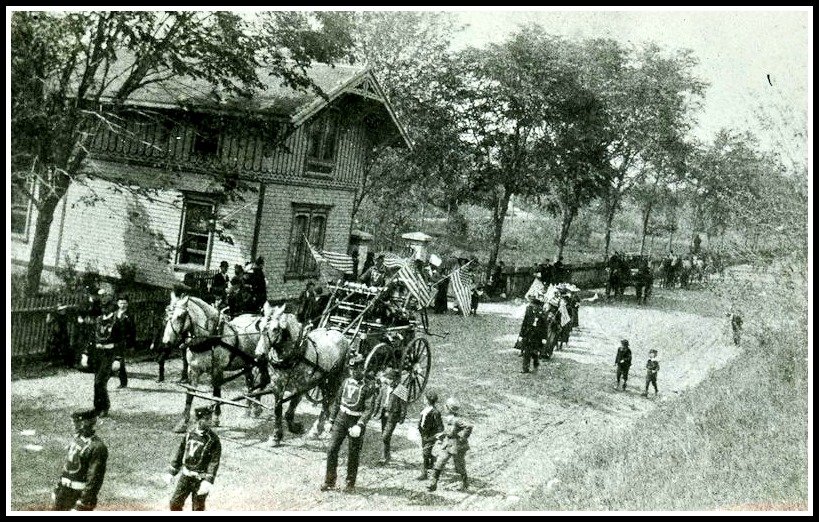 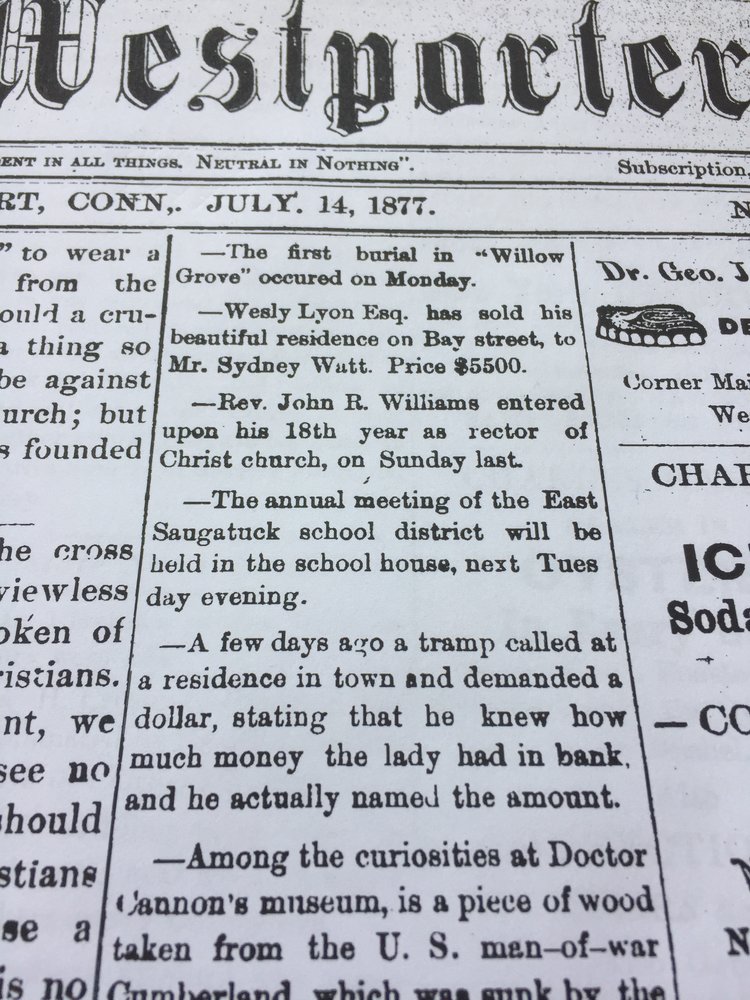 It read:  “ – The first burial in “Willow Grove” occurred on Monday.”

Following the burial, a trend took hold like none seen before. Families were choosing Willow Brook for their cemeteries needs, and for good reason.

Fueling this trend were scathing articles smeared in the Westporter regarding Evergreen Cemetery's lack of care for their property.

​These articles first appeared shortly after Hurlbutt's initial purchase of the property and ramped up near the completion of Willow Brook.

In the articles below, a demand from the community on April 20, 1878's publication (Below Right).

These stories would continue through November of 1881, but not before the most damaging story published on Saturday, September 27, 1879, which sealed Evergreen's fate.(Below Left)

(We've been able to confirm the oldest death recorded that was transported here from Evergreen Cemetery was of a Ms. Charity Jesup, who died at the age of 32 on May 30, 1816. She was re-interred here at Willowbrook Cemetery on November 1, 1889 in Section 4, within Plot No.'s 17-22 along with 7 other family members that day.) 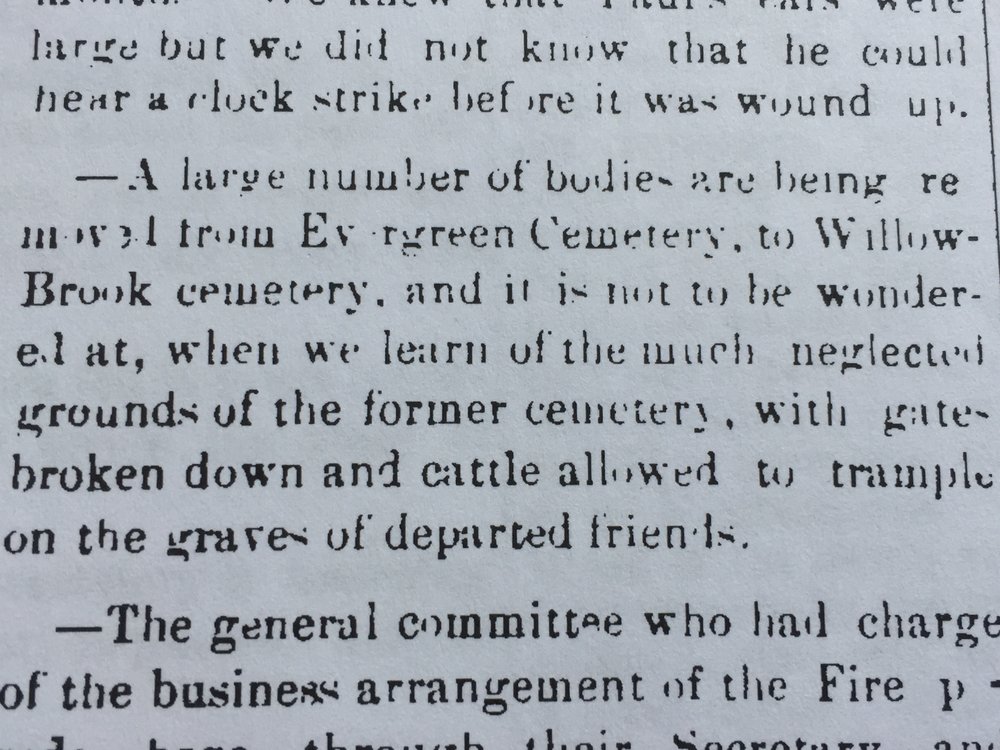 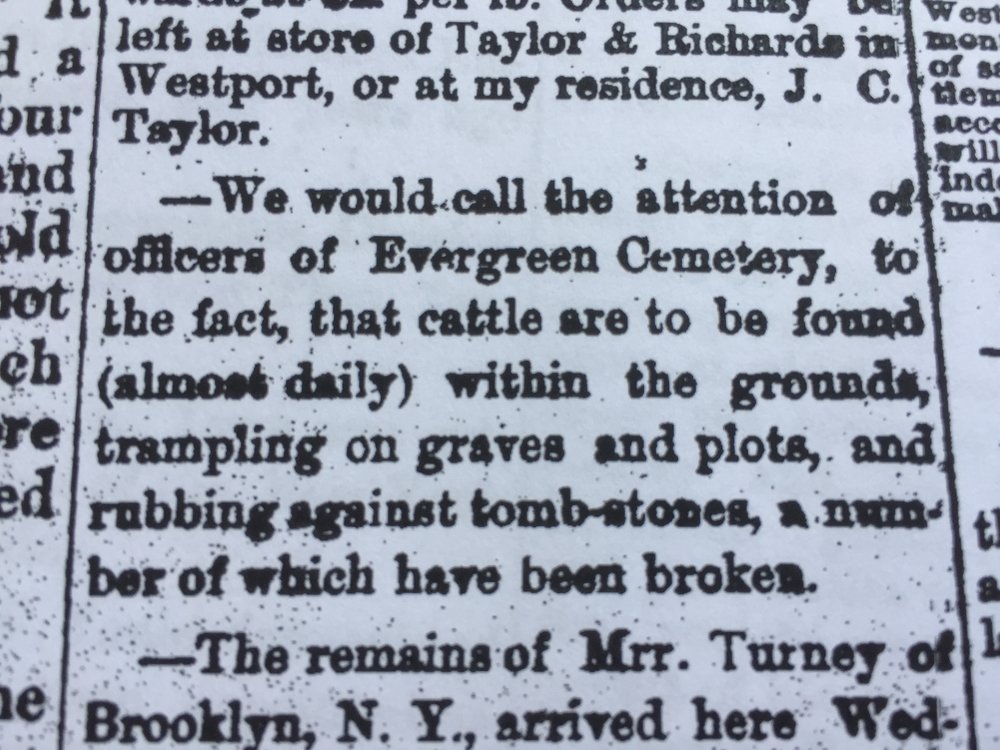 Willow Brook's Board of Directors were clever, also publicizing the installation of glorious expansive monuments placed by grieving families. The first monument to be placed in Willow Brook was on Saturday, May 24, 1879, at which time it was reported: “The first gravestone erected in “Willow Brook” Cemetery was put up today by Jennings of the Marble Works, over the grave of the son of Edward and Lizzie Beecher". This brilliant marketing campaign continued through 1881.

These methods continued to keep the Cemetery relevant. On July 27, 1878, the Westporter suggests a community gathering at Willow Brook, to celebrate their grand opening of sorts, which includes music by the town’s band, combined with choirs of the various churches. Unorthodox by nature, the cemetery became the first modern non-denominational cemetery in the area, and yet, it was readily accepted by the local clergymen.

Probably the most gratifying moment for our Founder Hurlbutt and architect Olmstead, was May 15, 1880’s publication, which boasted the cemetery's financial success and popularity. Olmstead’s vision became a reality and Hurlbutt’s business sense was validated with this small paragraph. 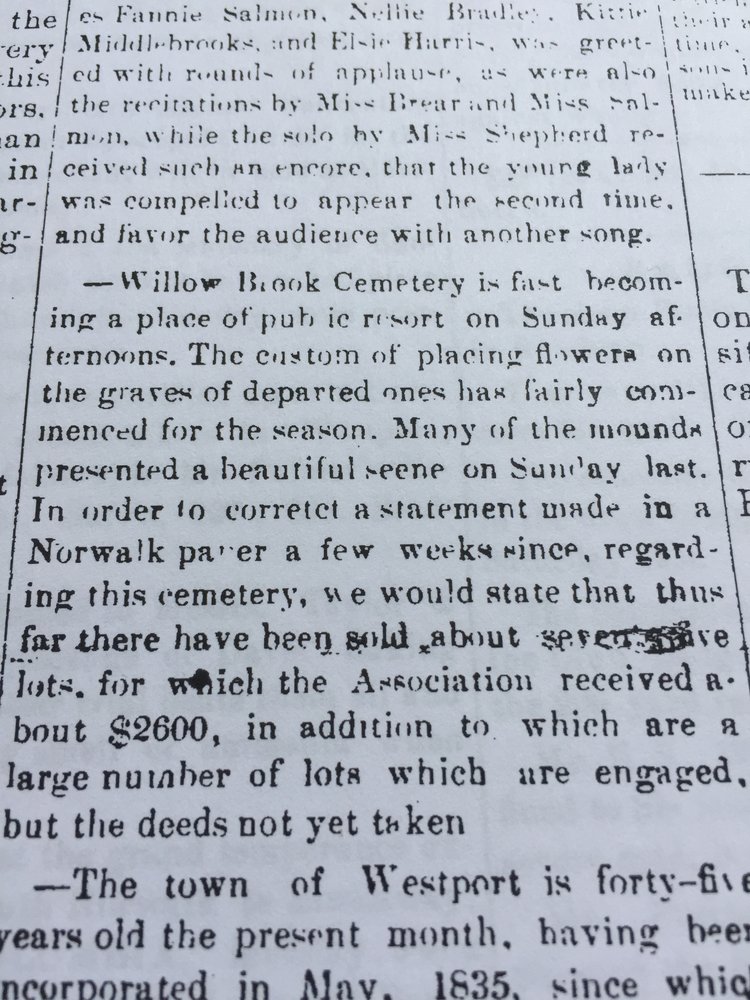 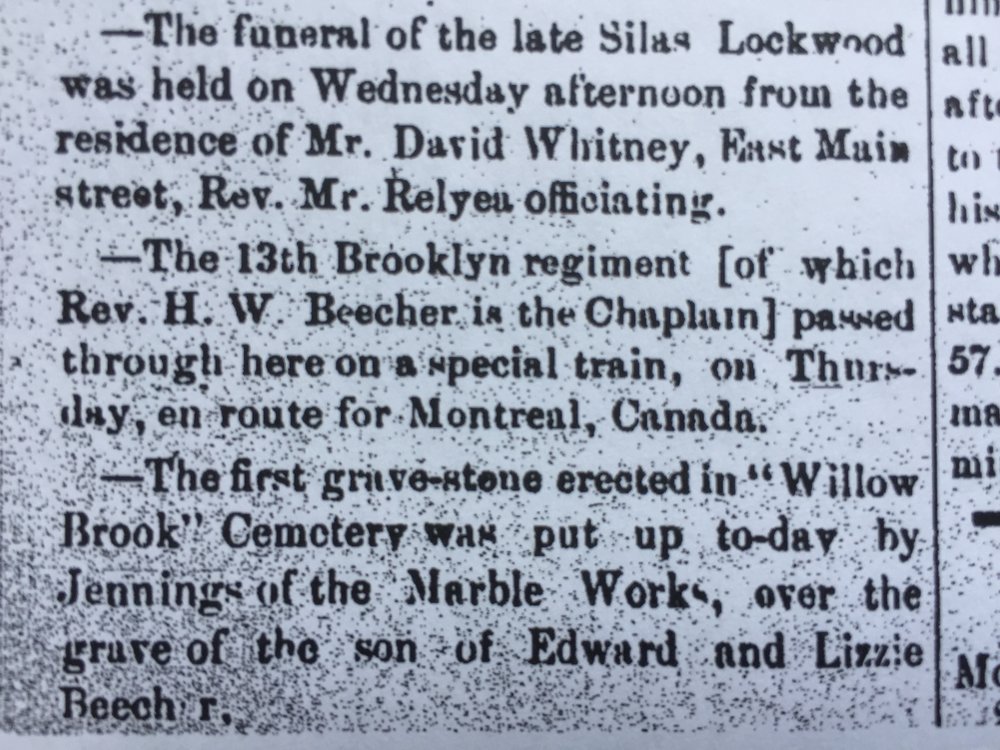 Modern times changed Willow Brook to Willowbrook and many impressive sections have been developed, but the charm and beauty envisioned by Olmstead still lives on.

The legacy of Ambrose S. Hurlbutt of providing families with exceptional service also continues. Regardless of religious affiliation, or lack thereof, everyone is welcome here at Willowbrook.

Accolades are given to many board members such as Gault and Kowalsky, staple surnames in our community for their devoted service here at Willowbrook. It's individuals like them who help acquire additional property to ensure the future and prosperity of our cemetery, for generations to come.

Present day, Willowbrook boasts nearly 35 acres of land, 10 of which is still undeveloped for future use.

Members of the entertainment community, socialites, founding fathers and prominent business people from Westport and surrounding towns are buried here at Willowbrook Cemetery - and we are honored to have them as residents.